New study: This Fynbos bird is disappearing – as temperatures rise

New study: This Fynbos bird
is disappearing
– as temperatures rise 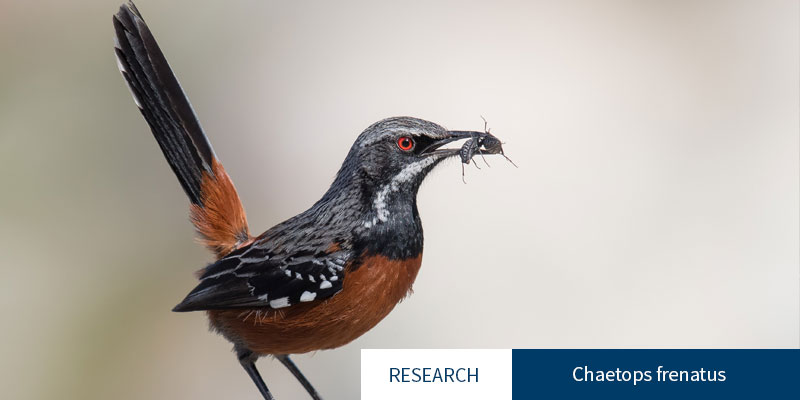 The Cape Rockjumper (Chaetops frenatus) is found only in the mountain Fynbos of southernmost South Africa.

But new research has found that this species is fast disappearing from sections of its traditional range – including in low-lying Overberg areas. And this is likely due to a changing climate.

The study was conducted by Prof Res Altwegg and Gregory Duckworth of the University of Cape Town. Prof Altwegg presented their findings at the recent Fynbos Forum, held in Baardskeerdersbos in August.

Their study compared sightings of the Cape Rockjumper collected by citizen scientists over two phases of the Southern African Bird Atlas Project (SABAP). The first phase ran from 1987 to 1992. The second phase ran from 2008 to 2015.

They found that in the early 1990s, the species was common in the eastern part of their range in the Cape Floral Kingdom.

But during the second phase of data collection, numbers had declined considerably (although sightings remained strong in the western sections of their traditional range). In lower-lying areas, the Cape Rockjumper all but disappeared.

According to Prof Altwegg, “Our results suggest that the Cape Rockjumper’s range contraction during the study period was likely due to increasing extinction probability in response to increases in the mean temperature over the warmest annual quarter and adds to the evidence that climate change is a key driver in the decline of this species.”

In response to a question, Prof Altwegg noted the declining numbers could be as a result of the bird’s inability to forage properly in the hotter temperatures. This in turn also affects their nesting success. Their nests are also more vulnerable to predators.

While the Overberg Crane Group does not work specifically with the Cape Rockjumper, the study is still important, as it demonstrates how a changing climate could be impacting on species.

He noted, “Climate and land-use change cause species to disappear from large parts of their ranges but the proximate cause of local extinctions is often unknown.”

While there may be more answers now regarding the Cape Rockjumper, little is still known about how climate may be impacting many of our other bird species, including those we actively monitor in the Overberg. This shows the importance of research here, to help us better understand, and protect these species.