Cranes and culture: How these special birds have shaped our histories 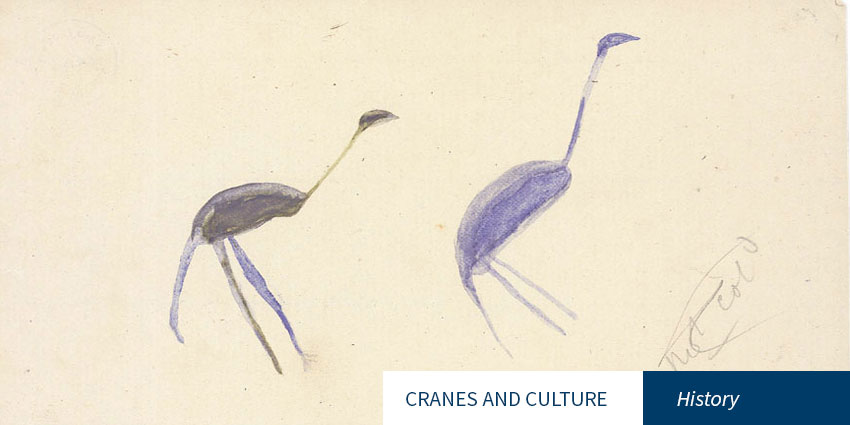 Above: This picture of two Blue Cranes was drawn by |xam artist |han≠kass’o in 1879. It now forms part of the Digital Bleek and Lloyd Collection

Various cultures from around the world have long revered cranes as symbols of grace, wisdom and prosperity. These extraordinary birds are not only integral to their ecosystems and the natural world, but also feature in the formation of beliefs carried over from ancient times that we still hold today. From their important roles in well-known Asian mythologies, to their modern associations with African pride – cranes and culture go hand in hand.

Cranes occupy an important role in many cultures – not least in South Africa, where the Blue Crane is a symbol of bravery. 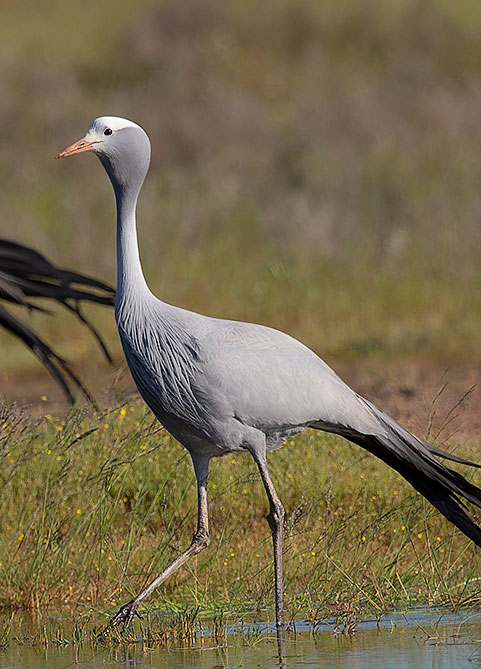 Our national bird is known by many names throughout South Africa: mogolodi in Sepedi, bloukraanvoël in Afrikaans and mxololo in Ndebele. The bird is admired for its bravery and hunting ability in the Ndebele culture, and is therefore forbidden from being hunted or eaten. 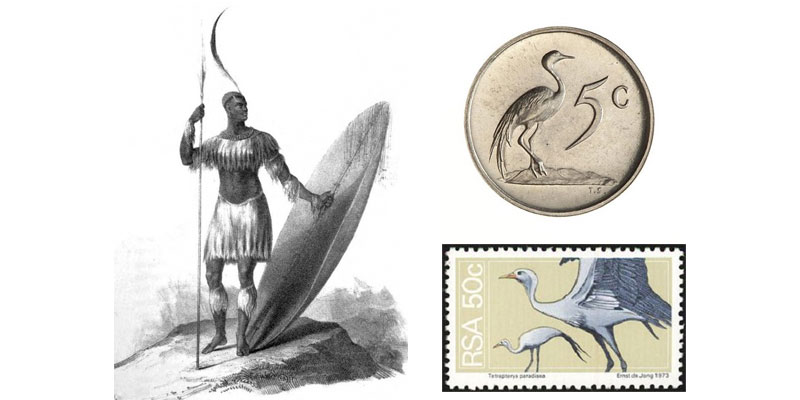 In Xhosa and Zulu, the bird is known as indwe and plays an important cultural role. For the amaXhosa people, the feathers of indwe are an indication that a warrior has been honoured for bravery by the chief during ukundzabela – a ceremony after battles where feathers are presented to heroes.

Similarly, in Zulu culture, notable warriors and royalty will add the bird’s distinctive feathers to their headdresses, as can be seen in the famous sketch of King Shaka (above) wearing a single Blue Crane feather. In both cultures the status of isitwalandwe, meaning “the one who wears the plumes of the rare bird”, was only bestowed upon the most valiant warriors. Isitwalandwe is also the name of the Highest Award of Honour awarded by the ANC to activists who have contributed exceptionally to the apartheid liberation struggle.

In the indigenous |Xam language, female Blue Cranes are referred to as !k’o aiti, while males are called !k’o gwai. The Blue Crane also features heavily in |Xam oral history and legends, as the bird is said to be a person of the First Bushmen and the sister of the praying mantis, |kaggen. 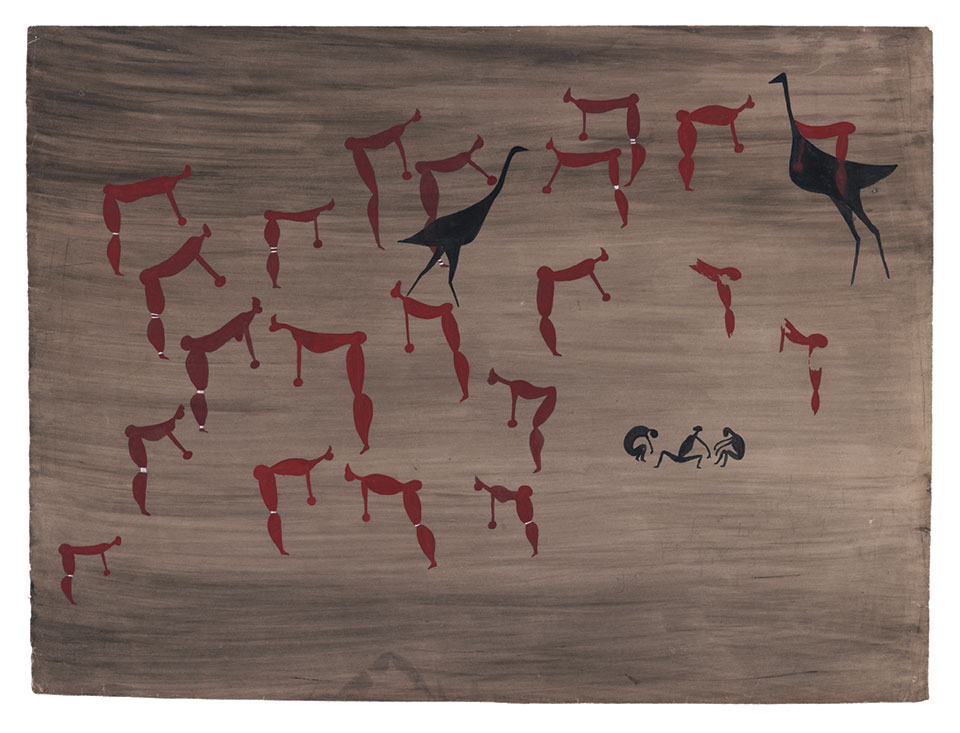 Above: These paintings are taken from rocks in Peshuli’s Hoek, Genaadeberg, and include two Blue Cranes. Source: The Digital Bleek & Lloyd collection

The Blue Crane can also be seen on our national currency on the 5 cent coin and is endemic to Southern Africa. Since there are only around 25 000 of these birds left in the world – half of which are in the Overberg – protecting their habitat and ensuring their survival is of great ecological and cultural importance. 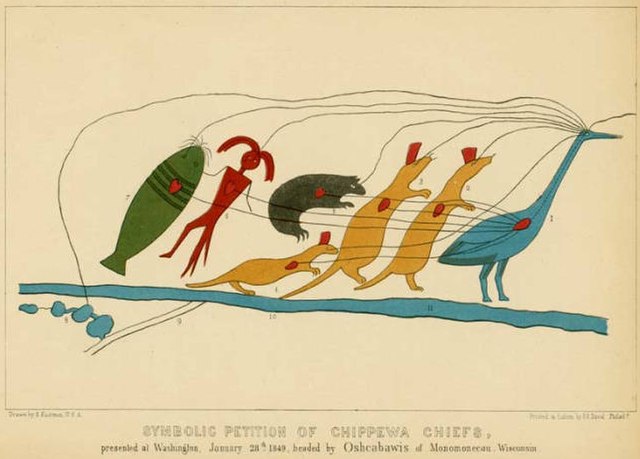 Above: The crane is one of seven original tribal clans in Chippewa culture. Source: Wisconsin Historical Society Library

Around the world, cranes have created symbols and myths.

We can see the crane depicted in old native American pictographs and rock drawings. In Chippewa culture, the crane is one of seven original tribal clans (dodems), and symbolises wisdom and equal communication for all members of the Anishinaabe group, to which the Chippewa people belong.

The crane (ajijaak, in the native Ojibwe language) is also called the echo-maker (baaswenazhii) and reminds one to be thoughtful, think carefully before one speaks and communicate clearly and honestly.

According to Chippewa oral history, members of the crane clan were given strong voices to guide their people righteously, and they often took on leadership roles in their communities.

Today the protection of cranes is important for the cultural preservation of all Anishinaabe people. Many tribes are involved with restoration work that help protect the wetlands – and their wildlife inhabitants – in the areas surrounding North America’s four Great Lakes.

It seems that everywhere cranes were present, they made an impact on people – from Australia, to Europe, to Asia.

Various Aboriginal Australian legends reference the Brolga, including dances that mimic the bird’s iconic courtship performance. Even the word “Brolga” stems from the bird’s name in the Aboriginal language Gamilaraay, burralga.

One notable story that features the Brolga, is an Aboriginal origin tale depicting how the sun came into being. During a quarrel with Dinewan the emu, the Brolga picked up one of the other bird’s eggs and threw it into the sky with rage. Here it landed on firewood and broke open, and as the yolk spilt out, the wood burst into flames. This fire lit up the world and is still lit everyday by the good spirit in the sky to bring heat and light.

It is also believed that the geranos – a dance which, according to myth, was invented by the demigod Theseus – was named after the Greek word for crane.

The crane symbol has also been linked to the gods Apollo and Haphaestus in various Greek and Roman myths. The Greek tale of Ibycus features a flock of cranes that came to an attacked and wounded Ibycus’ aid when he called for help. The birds followed the attacker and hovered over him, which drove him to finally confess to his crime. Another old tale – this one by the Roman author Pliny the Elder – features a crane standing guard and holding a stone in its claw so that it would not fall asleep. This iconic image gave rise to the symbol of “the crane in its vigilance” that is often seen in heraldry.

In China, the smooth and graceful movement of the crane inspired several styles of kung fu, including one of the five famous animal fighting styles of Shaolin martial arts.

A particularly poignant tale of hope and peace stems from the Japanese legend surrounding origami cranes.

In the mid 1900s, a young Japanese girl named Sadako Sasaki became ill with leukemia – likely due to the radioactive exposure she suffered from the Little Boy atomic bomb dropped on Hiroshima during World War II. One day, Sadako’s father told her an old Japanese folklore tale. According to legend, a crane can live for a thousand years, and anyone who can fold senbazuru – literally “1 000 paper cranes”, one for each year of the bird’s life – will be able to make a wish and have it come true. Sadako was inspired by this legend and began collecting paper to embark on her journey: she would fold 1 000 origami cranes and wish to be healthy again.

After completing her 1 000th crane, Sadako made her wish – but, sadly, it did not come true. However, she continued folding more cranes to make new wishes for her family until she passed away at age twelve, surrounded by 1 300 paper cranes decorating her room. The story of Sadako’s origami cranes and hopeful resilience inspired a monument in her name for all the children who died as a result of atomic bombings. Today, Sadako’s spirit lives on in the statue of her in front of a large origami crane in Hiroshima Peace Memorial Park. A similar statue of Sadako with a paper crane in hand can also be seen in Seattle Peace Park in the USA. 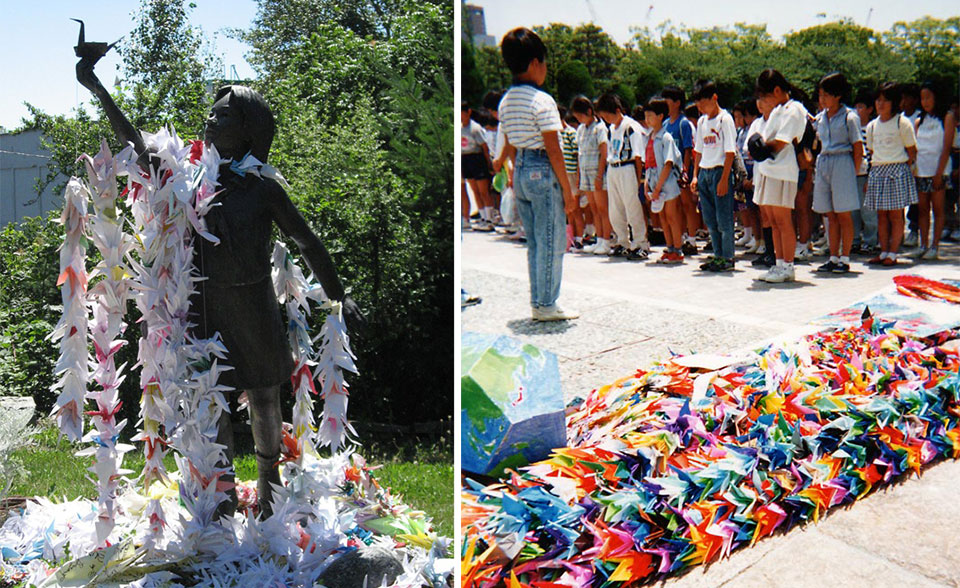 LEFT: Origami cranes for peace are placed on the statue of Sadako Sasaki in the Seattle Peace Park. By Lisa Norwood.  RIGHT: Japanese school children dedicate a collection of origami cranes to the memorial for Sadako in Hiroshima Peace Park. By Andrew Dunn.

Thanks to their striking beauty and regal stature, cranes have featured in many religious narratives.

A pair of krauncha – believed to be Sarus Cranes – play a central role in one of the most famous Hindu epics ever written: the Ramayana. The story follows the sage Valmiki watching a pair of cranes dancing along the Ganges, and seeing a hunter shoot one of the birds with his arrow. The intense anguish caused by this scene drives the sage to curse the hunter in poetry.

Since Sarus Cranes are believed to mate for life, the visceral grief of Valmiki after witnessing the bird lose its mate has become the epitome of sorrow in Hindu literature.

Black-necked Cranes are also important figures in Buddhism, since they are believed to be the embodiment of the sixth Dalai Lama, Tsangyang Gyatso. He was born to the indigenous Monpa tribe – a Buddhist community still found around India’s famous Tawang Buddhist monastery today. When the Black-necked Cranes migrate from Tibet to northeast India, the Monpas eagerly await their arrival, since the tribe still views these birds as an omen of good luck and prosperity. 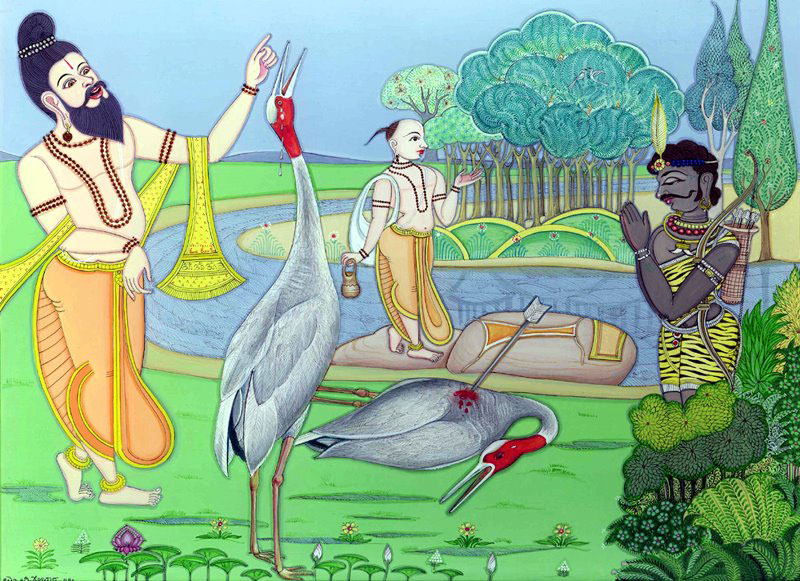 Above: Valmiki’s Curse, page 55 in The Quality of Cranes: A Little Book of Crane Lore. Source: The International Crane Foundation 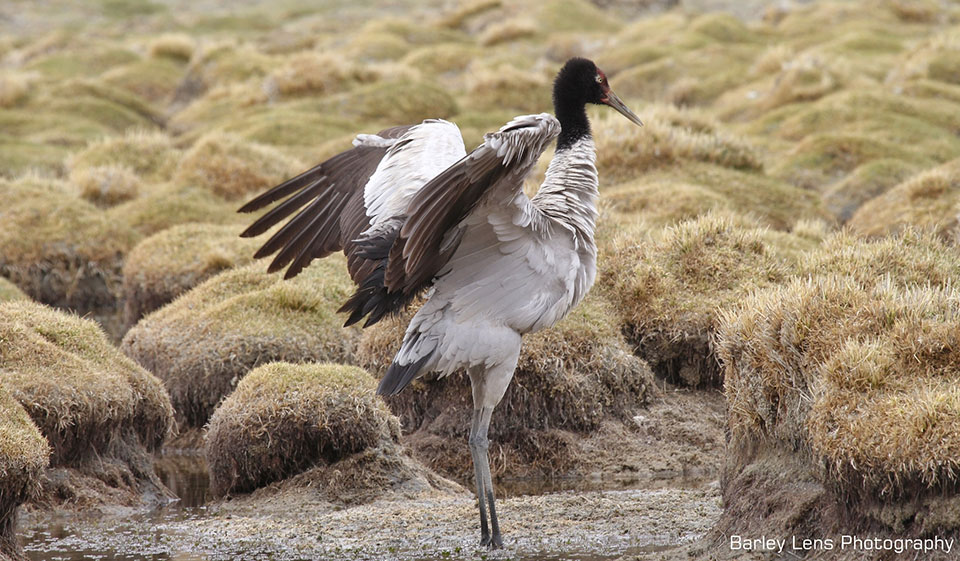 Today, these historic links between cranes and our ideals remain in the values we hold.

The impact these birds have had on our cultural consciousness can be seen in their prevalence in famous artworks and various national symbols. All 15 species of crane have even been featured on their own postage stamp!

In Uganda, the Grey crowned Crane is the national bird and it is central to the design of the nation’s flag, crest and even the official currency, the Ugandan Shilling. The bird also appears on Ugandan Airlines aeroplanes and has even prompted locals to nickname the national soccer team “the Cranes”.

For the Lozi people of Zambia, the symbol of the Crowned Crane can typically be seen during the annual Kuomboka ceremony. Each year the Lozi king – the Litunga – moves from the tribe’s winter area to its summer area by crossing the Zambezi river on a ceremonial barge with a statue of an elephant, which is his royal symbol. His wife’s barge is, in turn, topped with a statue of her own symbol – the Crowned Crane. 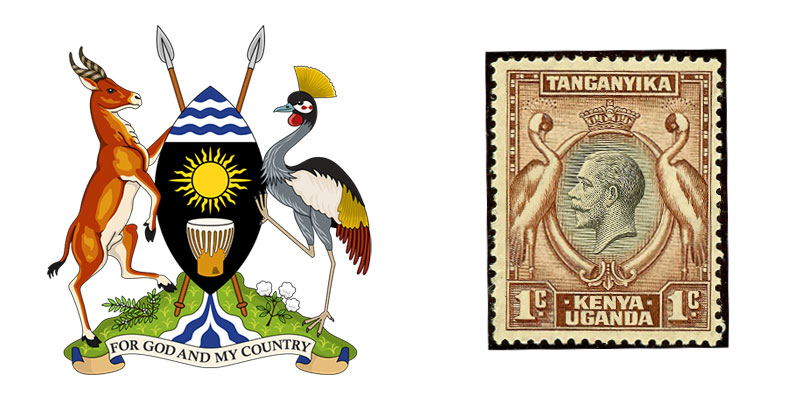 Above left: The Ugandan Coat of Arms. Above right: The Kenya Uganda Tanganyika 1c stamp of 1935. 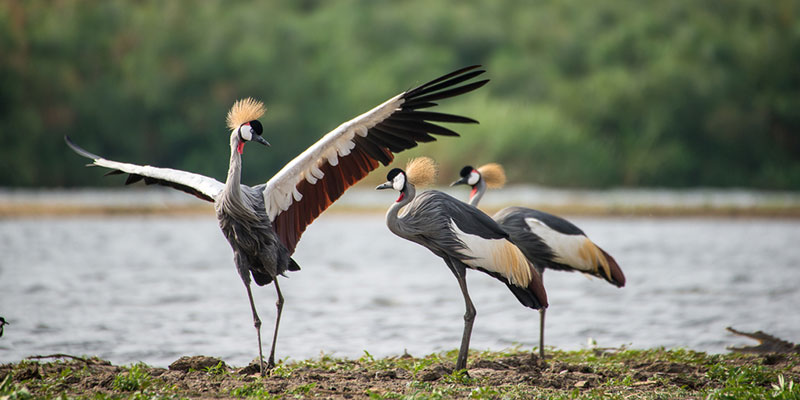 The Overberg Crane Group (OCG) has been committed to the conservation of Blue Cranes in the area since 1991, and continues to do so today.

With help from our supporters and partners, like the Endangered Wildlife Trust (EWT) and the International Crane Foundation (ICF), we want to ensure that the rich cultural legacy of cranes – particularly our Blue Cranes – never disappears.