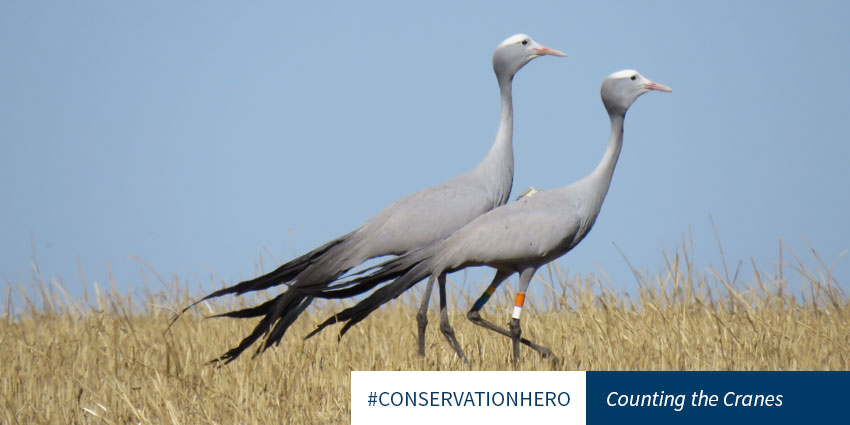 In the journey to protect rare bird species and their habitats in the Overberg, there have been many people who have selflessly contributed their knowledge and time to further conservation here. In celebration of our local conservation heroes, we shine a light on biologist and zoologist Donella Young and the important contributions she made to crane conservation during her involvement with the Overberg Crane Group (OCG).

Donella was with the University of Cape Town’s Animal Demography Unit when she became involved with the OCG in 1999.

At the time Donella was organising the Coordinated Avifaunal Roadcounts (CAR) Project, which she coordinated since late 1997, though the project itself is nearly 30 years old. “In 1993 David Allan was completing his MSc and they were concerned about the numbers of Blue Cranes and Denham’s Bustards, and he started the project in the Overberg and involved the Cape Bird Club,” she says.

Donella says, “Because the initial focus was on Blue Cranes, when I started working there I was invited to an OCG meeting and I was asked to give feedback about the numbers and whether the cranes were increasing or decreasing.”

The CAR Counts helped gather valuable data on the state of local crane populations in the Overberg, and later also in the Swartland. Word quickly spread, particularly through bird clubs, to six other provinces where new counting routes were soon established. Eventually from the 130 or so routes in 1997, this grew to 350 routes. 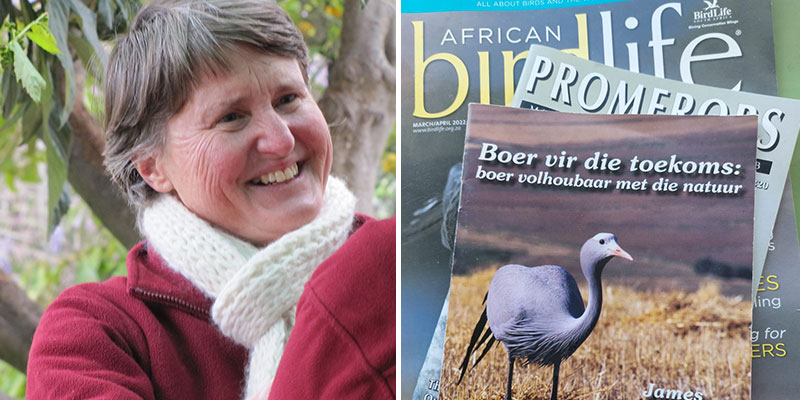 Today, counts still take place on many of the original routes across South Africa, with threatened large terrestrial bird species and even a few mammals included in the counts, driven by the local community.

Donella explains, “In the Overberg, all the routes are still counted, because each group of routes has an active organiser and they phone people to check if they’re available on the day. It’s important to try and have the same people count the same routes, because then it’s done in the same way following a standardised method. And they don’t just record the number of birds, but they record the habitat and the activity, driving slowly and stopping every 2kms to get out and scan with binoculars.” Donella acknowledges all the organisers, route leaders and observers for all their time, skills and petrol over many years and especially Inés and the late Duncan Cooke, who have organised the Overberg counts since 2008. She also thanked the Cape, Somerset West, Hermanus, Hartenbos, Tygerberg and West Coast Bird club members for their assistance in the Overberg and Swartland counts.

Because it’s community driven, they also involved children from a local primary school in Tesselaarsdal, and as many farmers as they could, alongside the bird club members and conservationists. “Young children have very good eyes! And they were mostly children from farms, so it was very important to increase their awareness of the value of birds,” Donella says. “And I think about 50% of the routes are counted by farmers, because farmers are there all the time, not just on the day of the count, and they have an ongoing concern.” 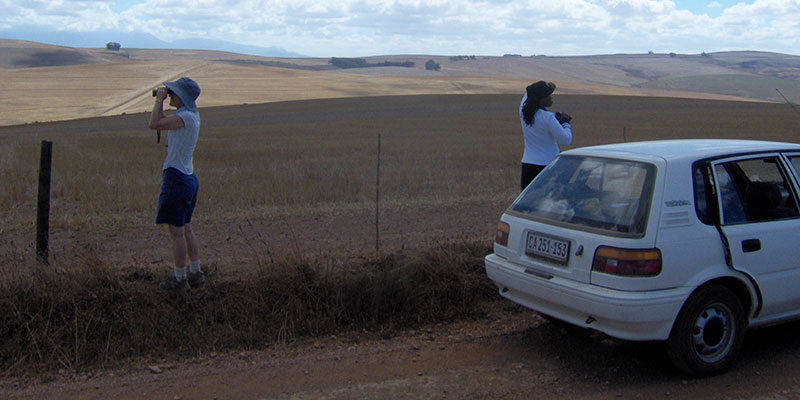 In fact, Donella realised early on that farmers were important allies in the protection of cranes in the Overberg – and working with the OCG gave her access to farmers in the area.

Farmers such as Wicus Leeuwner, Mick D’Alton, Pieter Albertyn and Stuart McLennan were particularly helpful in sharing their knowledge. “I was so grateful to have their insight and their amazing knowledge of various environmentally friendly management actions, because through the funding we had from the Critical Ecosystem Partnership Fund, we could summarise the CAR results and conduct some workshops with those in the agricultural sector.”

Together with zoologist and environmental consultant James Harrison, the then Project Manager of the CAR project from whom she learnt a great amount, Donella compiled a booklet encouraging farmers to conserve biodiversity on farms. The booklet – Farming for the Future: farming sustainably with nature – was produced in English and Afrikaans.

Looking back on this project, the collaboration with farmers stands out to Donella as a highlight of her time in the Overberg. “I was so thankful to be able to be part of the OCG meetings, because it was very helpful to learn more about the cranes – particularly from the farmers. The booklet was one of the things I really felt could contribute to conserving biodiversity on farms.” 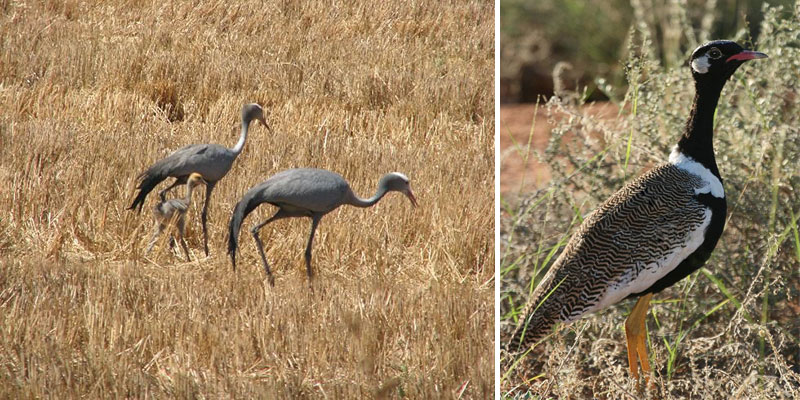 She co-authored the article with James Harrison and later published it in the Journal of African Ornithology, Ostrich. Here she showed the results from the beginning of the project until 2019.

These days, Donella continues to promote conservation through her work as a trained nature guide in Fish Hoek. “I hope to spread my love of nature and experience in conservation through taking people out into nature. I’m still learning, and the fynbos in this area is so diverse, I think I’ll be learning for the rest of my life.” 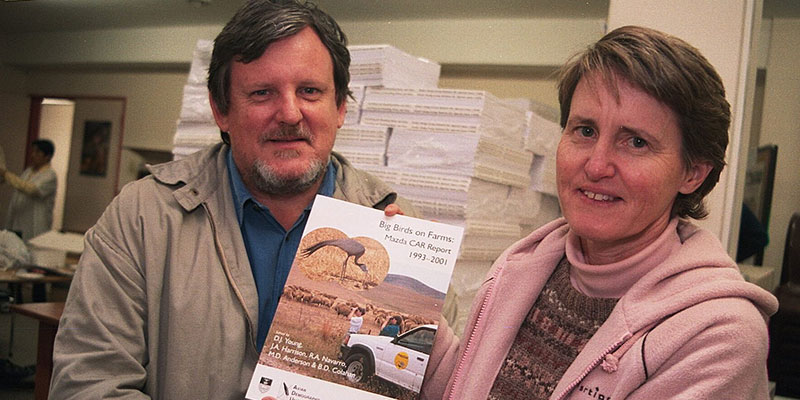 Like Donella’s passion for protecting nature, the conservation work is never finished.

She says, “There are a number of birds I am concerned about – particularly the Black Harrier. It’s a very threatened species that is extremely dependent on indigenous vegetation. We started counting them quite a while ago. And we counted the Southern Black Korhaan for quite a long time as well, and I’m very concerned about their decline in numbers in the Overberg.”

The Blue Crane numbers in both the Overberg and the Swartland initially increased exponentially. Then the Blue Crane numbers seem to have reached a dynamic equilibrium in the Overberg, while in the Swartland there has been more fluctuation. Conservation is still of utmost importance. “Nationally, they’ve just lost so much habitat in the grassland biome. So, I think further north the cranes are in a very difficult position.”

The Overberg has become an especially critical location for Blue Cranes, as about 50% of the national population is found here today. Donella says, “It’s amazing that in the Overberg, over 100 years ago, there were very few cranes, because it was all fynbos and renosterveld, and that’s not a habitat that they would normally go into. It’s incredible that a bird that used to breed in a wet, cooler summer has adapted to breeding in a hot, dry summer in the Overberg and Swartland.”

Everyone can help do their part to become involved with conservation, says Donella
– even those living in cities. 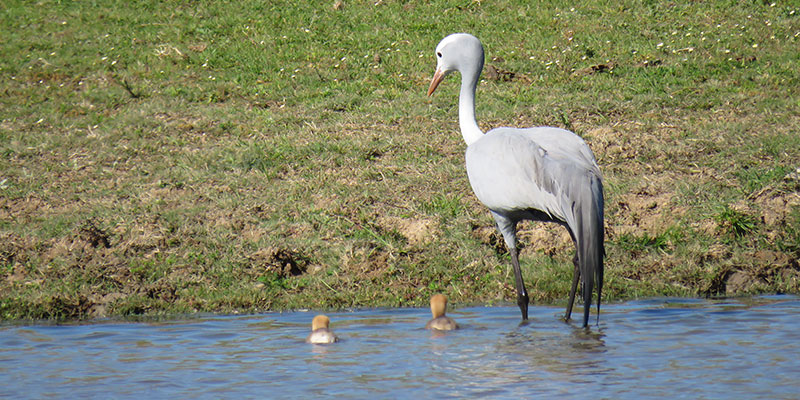 “Simple things like conserving as much indigenous plant life as you can, wherever you are – even in an urban setting you can plant indigenous plants in gardens to conserve as many birds, insects, frogs and other living organisms as possible, because that is what the species are adapted to,” she says.

“Also, if you see any birds caught in fences, or birds that have been killed by collisions with overhead power lines, report it.”

The CAR project is now managed by the Percy Fitzpatrick Institute of African Ornithology and Sanjo Rose is the Project Coordinator. For more on the project, click here.