Blue Crane chicks saved from a life in captivity…

Two Blue Crane chicks were confiscated in Calvinia in the Northern Cape, in November 2017, from very suspicious circumstances – and ended up being raised and rehabilitated to the point where they could be released back into the wild – in our beautiful Overberg. 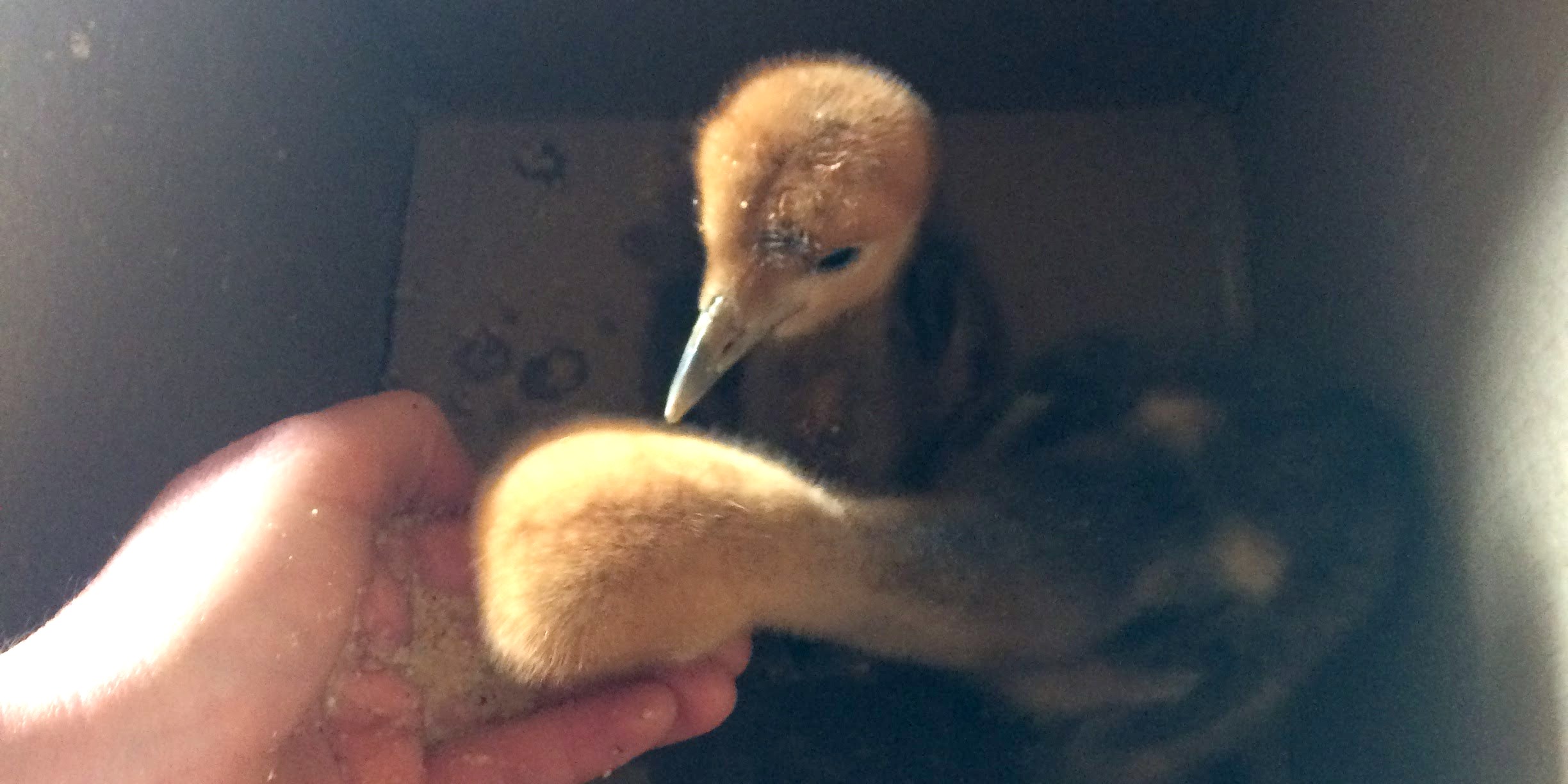 These two Blue Crane Chicks were confiscated after being found in a box in the town of Calvinia.

Megan Murgatroyd is a raptor specialist that earned her PhD by addressing the effects of agriculture on Verreaux’s Eagles. She is currently busy with her post-doctorate with the FitzPatrick Institute of African Ornithology, where she is still focusing on Verreuax’s Eagles but addressing wind turbine collisions which include studying the flight behaviour of GPS tagged Eagles.

She was on a field visit to Calvinia to assist an MSc student, Rona van der Merwe, to GPS tag Pied Crows.

They were unsure of the species and the person who they were confiscated from was adamant that they were Kori Bustards. Rona and Megan were asked to consult on this situation, and together they went to go and see if they can help.

A quick look and Megan could confirm that these were, in fact, two Blue Crane chicks, very young, and probably very far from home. Nobody knew where they came from, or where these young birds were heading to.

One thing was certain, they had been illegally obtained.

Megan phoned Hank Chalmers, the founder of Eagle Encounters, a non-profit wildlife rehabilitation, conservation, education and eco-tourism centre based on Spier Wine Farm in Stellenbosch, in the Western Cape. 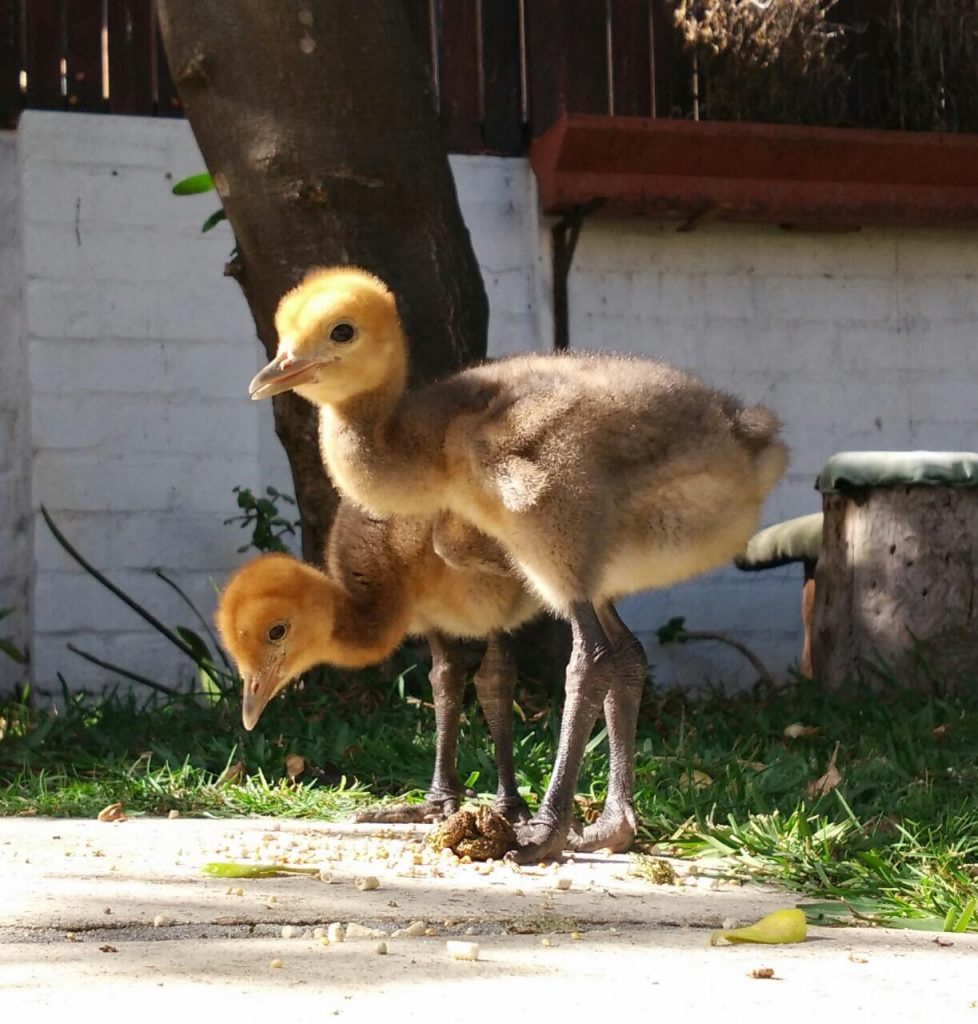 Hank can save, raise and rehabilitate just about any living creature… and he gave Megan the correct instructions on how to give these two feathered souls the care they needed until she could get them to

After a health check, they were in the clear. Megan and Hank agreed that she could (under Hank’s guidance) start the long rehabilitation process. She had enough space and was well situated to be able to give these birds the best chance at a second lease on life as they would get.

They settled in amongst the chickens in the yard, and soon there was a bit of tension between there new fowl and the chickens, and a competition around the food bowls ensued… but the poor chickens were soon out dominated!

There was a marked size difference between the cranes right from the start. The larger one took personal offence at the rug in their sleeping area, constantly tearing at the threads on the edges – and he earned the Afrikaans name “Rafel” (a frayed thread). The smaller one was very talkative and soon earned the name “Pipsqueak” because of its constant peeping, which turned into “Pip”.

Under Megan’s supervision, and with the correct rehabilitation treatment and procedures, these two gorgeous little chicks thrived. During the first three weeks, their weight more or less doubled every week, by the fourth week they had outgrown the scale! 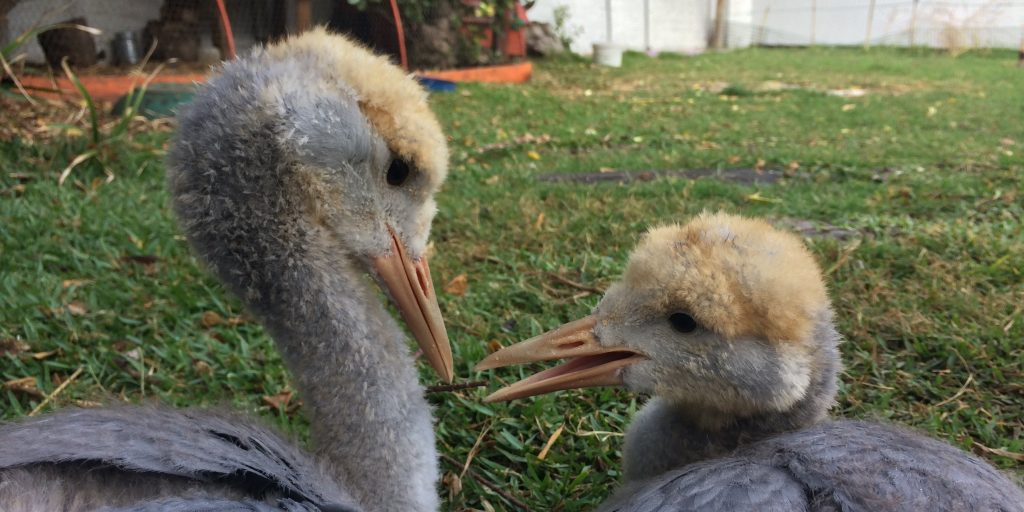 With the correct treatment, and the right care, they flourished!

These little creatures have strong natural instincts and evidently belonged in the wild. They showed Megan their love for water by climbing into their water bowl, which was later increased to a paddling pool. Did you know that Blue Cranes sleep in water at night to evade predation? They also had an insatiable appetite for snails, one of the ecosystem functions they provide in their natural environment.

Seeing these natural instincts persist, and watching them grow and thrive the attention was drawn back to when they were found, and one cannot but help to wonder what on earth was somebody doing with them in a cardboard box?!

ILLEGAL TRADE?! Yes, Blue Cranes are one of the most illegally traded birds, alongside parrots, in South Africa.

We just do not hear about it as often as we hear about the more iconic species being poached. The downfall of being neither hairy nor scary… Blue Crane eggs and chicks are poached for the pet trade. To stand in a cage, or have their wings clipped so that they cannot fly away. This is such a disservice to a species that is highly gregarious outside of breeding season – and no doubt where these two would have ended up if they had not been confiscated.

Soon these two Blue Crane youngsters were approaching 90 days old and stood well over a meter in height, they were practising their wings and Megan knew the time had come for the next step in their rehabilitation. They were transferred to a paddock at Eagle Encounters under the guidance of Eagle Encounters and Kevin Shaw from CapeNature. Kevin fitted them with coloured rings. These rings are an identification feature, distinct to each crane, making it possible for researchers to recognize individuals again as part of the National Blue Crane Monitoring Program. 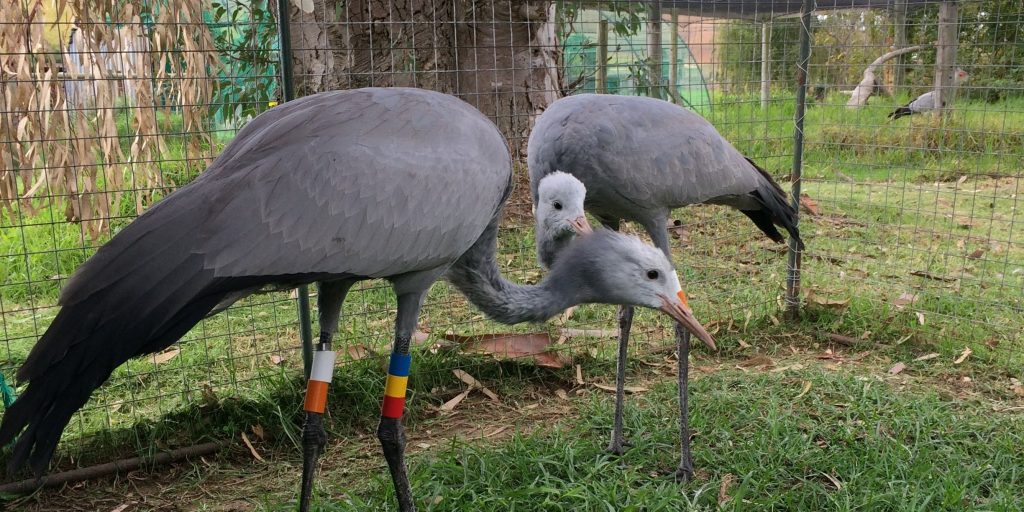 Ringed and ready for release…

They grew stronger by the day, and soon they were able to fly.

The hope was for them to soft-release from this paddock in their own time, joining the local resident Blue Cranes in the area.

But these two scoundrels had other plans though. They were now 6 months old and showed a much stronger interest in people than their newfound freedom. After a few visits to the Spier hotel and restaurants, they had to be restrained from mischief in a cage… and Megan started looking for more viable areas to do a proper release.

She contacted Tanya Smith from the Endangered Wildlife Trust, and Tanya directed her to Keir Lynch, the Chairman of the Overberg Crane Group. Keir found a suitable site, with a flock of over 50 birds, where these two Blue Cranes could be released.

There were far fewer people to interact with, and the farmers in the area are the keen custodians of the Blue Cranes on their properties – which meant there would always be someone to keep a watchful eye over them as they settle into their new family environment.

On Saturday, 26th May 2018, Megan’s hard work came to fruition. She picked up Pip and Rafel from Eagle Encounters and took the scenic drive through the Overberg to the site just outside of Bredasdorp.

Megan and Keir offloaded the cranes a considerable distance from the main flock, the last thing they wanted to do was scare the flock into taking off through their presence. Rafel climbed out all by himself and started dancing all around the people present at the release. Pip needed a bit more coaxing, but as soon as they were both outside they were prancing and preening, exploring the soils and even taking a first short, free maiden flight…

They both seemed really delighted, and jumped around quite a bit, they threw some stones around and stretched their wings some more.

The vehicles slowly retreated, and after just a short wait Pip and Rafel took to the wing.

With a large circling flight, they banked slowly and landed with their new wild crane family. They were finally back where they belong. 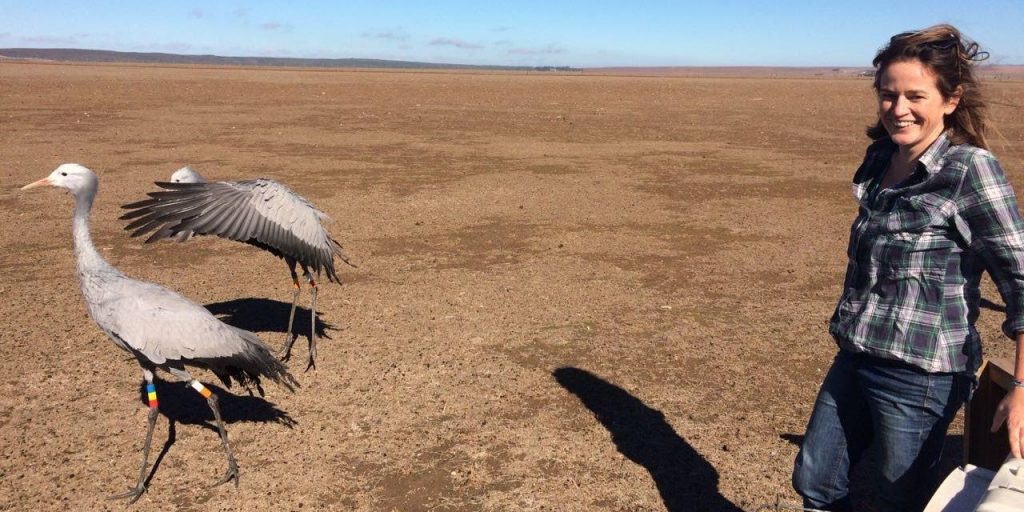 Bittersweet moment, Megan stands with Pip and Rafel before they flew off to meet the flock.

These two little birds touched Megan’s heart deeply, and we salute her hard work in rehabilitating these precious birds. We also admire Megan’s courage to give them the best possible chance at contributing to the future of their species by releasing them back into the wild.

*At the release of this article Pip and Rafel have been free for 6 days, and they have been sighted twice, both times still with the flock to which they have been released.

Please remember to report any fenceline or powerline collisions, as well as dead or diseased birds in the Overberg to the Overberg Crane Group at support@bluecrane.org.za. Any ringed birds can also be reported to the OCG. The Overberg Crane Group is a Non-profit organization that is reliant on funding from the public to continue our endeavours in avian conservation – please consider contributing, and contact donate@bluecrane.org.za for further details.

Thank you to Eagle Encounters, CapeNature and the FitzPatrick Institute of African Ornithology for the assistance with these chicks – and the Endangered Wildlife Trust and Overberg Crane Group for the release.