4 favourite birding spots in the Overberg 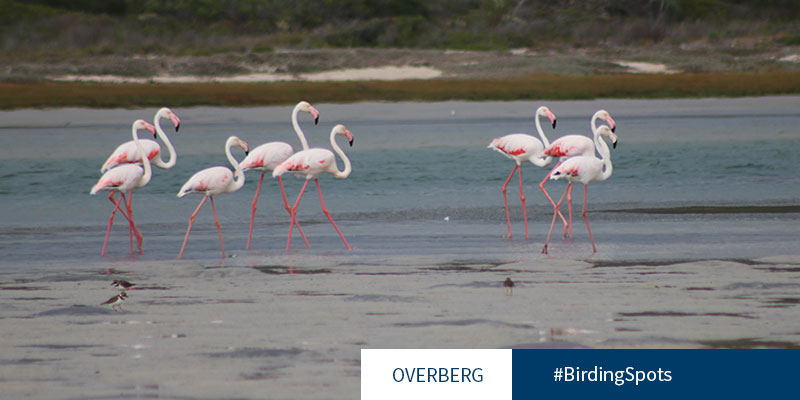 Where are some of the best places to go birding in the Overberg?

There’s no shortage of fantastic opportunities for birders – many on land that’s open to the public.

Here are 4 of our favourite birding spots. And some of the species you could see there.

(Hint: These could serve you well this Big Birding Day on Saturday, 30 November 2019). 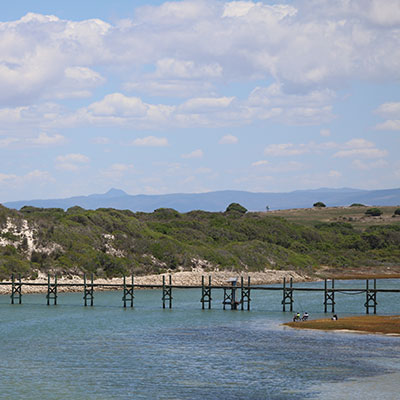 This estuary is a Ramsar-designated site – and during a visit here, it becomes clear why.

This is a wonderful destination for birders; not least because it affords you ample walking and hiking opportunities. The 7km Sterna Trail leads you through milkwood forests, Limestone Fynbos and Dune Fynbos.

And whether you walk the trail, or simply stroll towards the ocean, you’re likely to see species such as the Caspian Tern, Kittlitz’s Plover, Common Sandpipers, Curlew Sandpipers, Common Greenshank, Three-banded Plover, Little Stint and even Greater and Lesser Flamingos.

The reserve is of special conservation significance because of the Damara Tern – a species listed as Vulnerable on the IUCN Redlist. The Damara Tern breeds here (it’s one of only two breeding sites in South Africa). 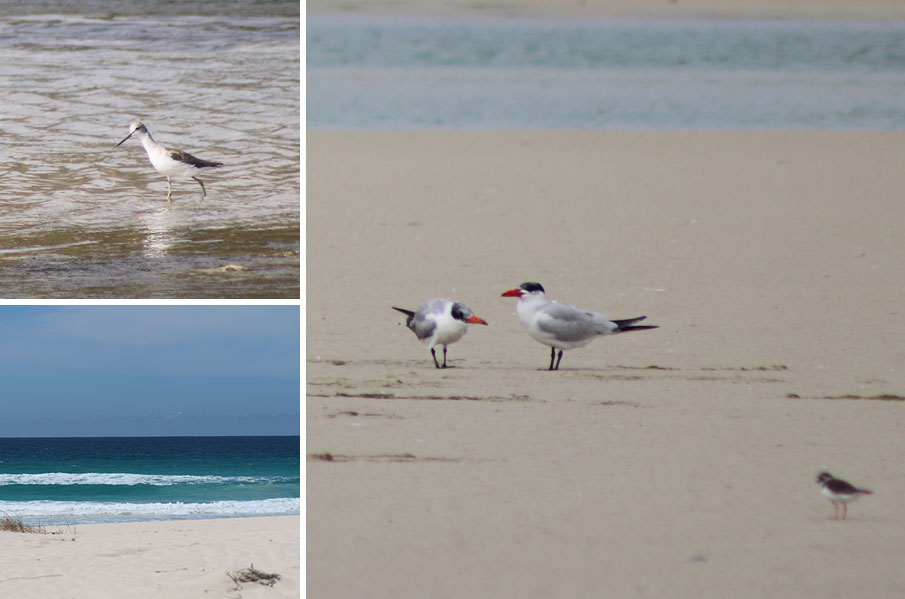 In fact, the vlei provides a home to nearly 100 species of waterbirds (and often around 8000 birds at any one time). Birders should look out for the Yellow-billed Duck, Little Grebe, Cape shoveller and Great crested Grebe; and if you’re fortunate during your visit, Greater Flamingo.

Perhaps the most awe-inspiring bird sighting in this reserve is the Endangered Cape Vulture. At Potberg in De Hoop, numbers have increased from only 40 Cape Vultures in the 1990s, to around 300 today.

Along the shore near Koppie Alleen, you’ll likely see African Black Oystercatchers, White-fronted Plovers and Grey Plovers. And during your drive through the park’s Fynbos areas, enjoy Fynbos endemics like the Cape Sugarbird and Orange-breasted Sunbird, and perhaps even raptors like the Pale Chanting Goshawk. 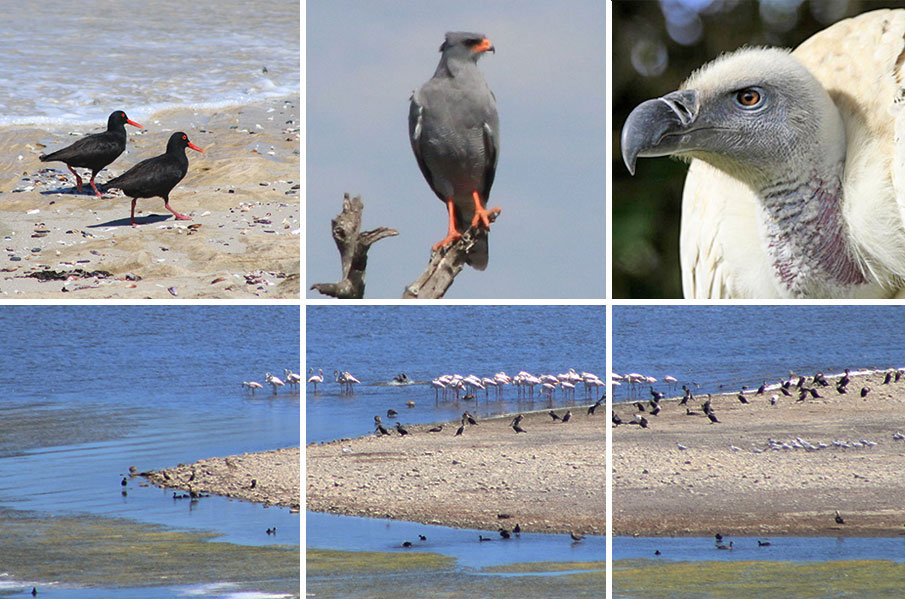 This is the smallest national reserve in South Africa. But for birders – certainly one of the most diverse.

The different vegetation types in this 3,475 hectare reserve close to Swellendam, are home to a number of special species.

From the entrance gate (to the rest camp), enjoy the Renosterveld patches – and the Southern Black Korhaan, Secretarybirds, Agulhas Long-billed Larks and Cape Clapper Larks that can be seen here.

And in the Fynbos and close to the rest camps, look out for raptors like the Black Harrier and the African Goshawk. 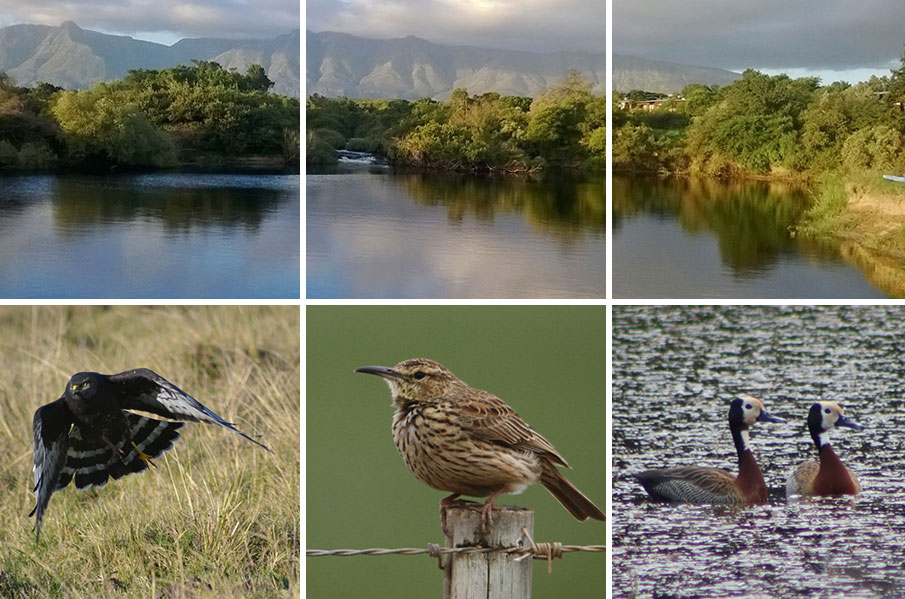 This is a UNESCO-designated reserve (the first such reserve in South Africa) of around 70,000 hectares.

It’s a large area that includes private land, but also reserves like the Hottentots Holland Nature Reserve (close to Grabouw).

In fact, the Kogelberg Biosphere Reserve has three major mountain landmarks: The Kogelberg Mountains, the Houwhoek Mountains and the Groenlandberge. The mountains are covered in Fynbos, but in the basin, agricultural land also provides a habitat to numerous bird species. The Biosphere Reserve was badly affected by a wildfire at the start of 2019 – with large tracts of Fynbos burnt. But already patches in the Harold Porter Botanical Gardens and surrounds are starting to show signs of regrowth.

What can birders look out for? This is one of the few areas where all five Fynbos endemic bird species occur: the Orange-Breasted Sunbird, Cape Sugarbird, Cape Siskin, Cape Rock-Jumper and Victorin’s Warbler. If you’re lucky, you could see the Hottentot Buttonquail – although this is not a common sighting. There’s more chance you’ll run into a Grey-wing Francolin, or a Cape Grassbird.

A number of raptors are found here, like the Martial Eagle, Jackal Buzzard, Booted Eagle, African Fish Eagle, Verreaux’s Eagle, Lanner Falcon and Peregrine Falcon. Because of the pine plantations here, you’re also likely to see Forest Buzzards, which breed in the pines (as do Martial Eagles).

And in the agricultural regions, keep an eye out for the African Pipit and the Common Quail. 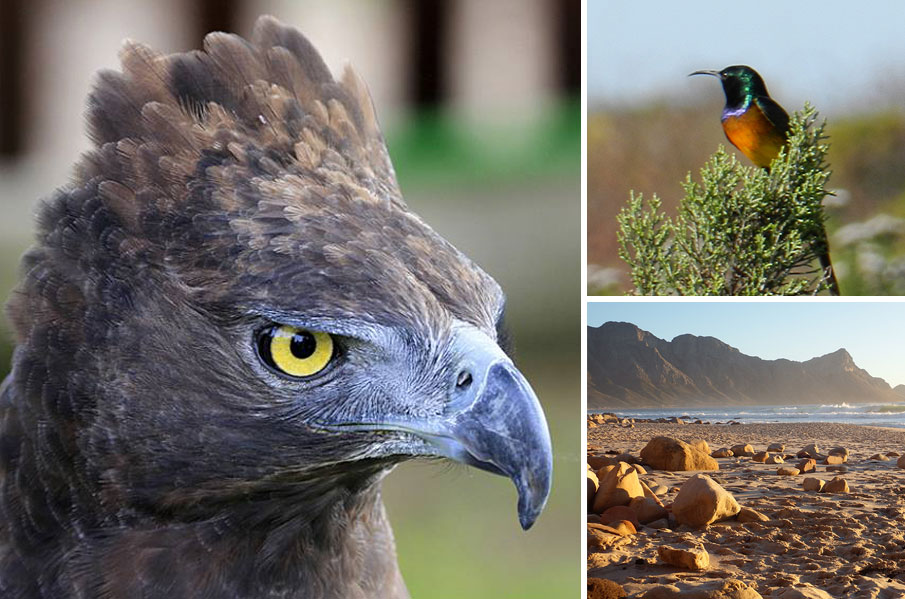 More info on the Reserve, and the birds found here

Now put this info to good use – for Big Birding Day.

On Saturday 30 November, BirdLife South Africa hosts this day. For 24 hours, your team or your community or birding club log as many sightings and calls as possible – in a 50km radius.

At the OCG, we partner with BirdLife South Africa. And we support this venture because it helps collect important data on species and where they occur.

Here’s how to enter for Big Birding Day

And for more info on birding routes
available in the Overberg and beyond, visit:
www.westerncapebirding.co.za

(Please note: Not all the photos shown here were taken in these reserves. While many were, some were taken elsewhere in the Overberg.)